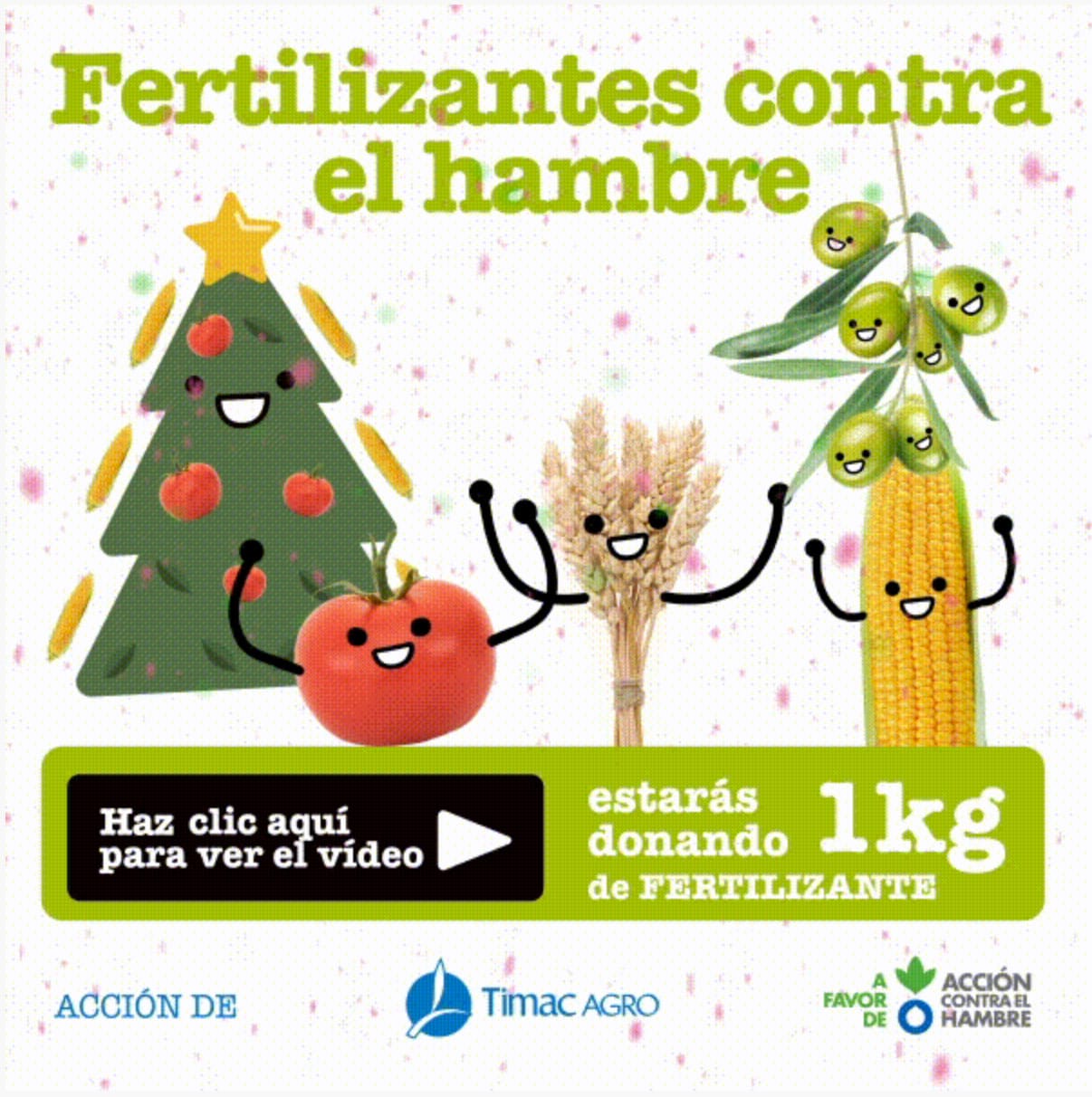 In December 2017, TIMAC AGRO España has launched the solidarity initiative “Fertilizers against Hunger” in support of Action Against Hunger. This action aims to fight hunger by improving access and management of agricultural resources production and livestock production in the most disadvantaged areas.

TIMAC AGRO España is committed to offer 1 kg of fertilizer for each sharing of the solidarity video created for this initiative. The video, available since December 12 on the YouTube channel of TIMAC AGRO España, aims to raise awareness and involve the company in this cause.

FAO warns about the progress of hunger in the world.

After nearly 10 years of progressive decline in global malnutrition, the FAO report, released in September 2017, reveals that 11% of the population suffers from hunger, which represent 815 million people, 38 million more than the previous year.

The positive contribution of fertilizers

According to the FAO, 50% of the world’s agricultural and livestock production is achieved through the appropriate use of fertilizers. Therefore, its promotion contributes directly to the fight against hunger.

The video quickly became viral with more than 8,500 views in just 13 days. Various associations, media, companies of the sector, distributors, customers and collaborators of TIMAC AGRO didn’t hesitate to join the cause which in a few hours was shared through the different social networks.

A satisfying start for a video aimed at raising society’s awareness of the problems of hunger, food insecurity and malnutrition.

This action marks the beginning of a relationship between the two organizations in their attempt to contribute to the improvement of agricultural and livestock production in the most disadvantaged areas and, consequently, to the fight against hunger.

07 Mar, 2018
€120,000 in global funding on the occasion of the Groupe Roullier Innovation Awards
800 farmers at the presentation of Grassland AGRO, with Teagasc.
We use cookies on our website to give you the most relevant experience by remembering your preferences and repeat visits. By clicking “Accept”, you consent to the use of ALL the cookies. However you may visit Cookie Settings to provide a controlled consent.
Cookie settingsACCEPT
Manage consent
This website uses cookies to improve your experience while you navigate through the website. Out of these cookies, the cookies that are categorized as necessary are stored on your browser as they are essential for the working of basic functionalities of the website. We also use third-party cookies that help us analyze and understand how you use this website. These cookies will be stored in your browser only with your consent. You also have the option to opt-out of these cookies. But opting out of some of these cookies may have an effect on your browsing experience.
Necessary Always Enabled

Any cookies that may not be particularly necessary for the website to function and is used specifically to collect user personal data via analytics, ads, other embedded contents are termed as non-necessary cookies. It is mandatory to procure user consent prior to running these cookies on your website.